Years of the Maritime Continent Blog

The R/V Mirai has returned to Shimizu port from her 45-days cruise in the tropical western Pacific. In addition, enhanced radiosonde soundings at Legaspi/Philippines, Yap/FSM, and Palau have been ended on September 14, 2020.

So, now we have completed our field campaign successfully against the threat of covid-19 pandemic. We really appreciate great support from the local agencies in those islands (PAGASA, Yap Weather Service, Palau Weather Service, and NOAA) and great effort done by all participants.

Hereafter, we will analyze data to see what really happened during the past 1.5 months. Numerical model will also help us to understand those phenomena.

We will also intend to release quality-controlled datasets in timely manner from this YMC data site.

You will see our progress through our websites as well as papers. Bye for now! 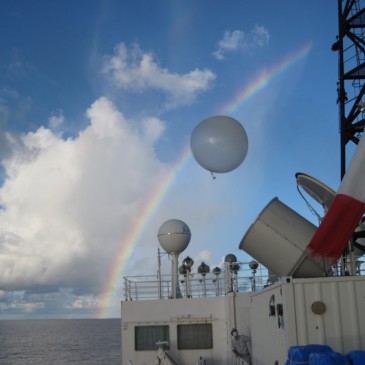 We have spent here on-station over two weeks and could obtain various observation data. The sky was decorated with this beautiful rainbow, as if they had celebrated us. I had better say rain-ball rather than rainbow to indicate this nice combination.

by BG (edited at J-Office for English ver.)

Now the time for telling surface drifter after two talks on TRITON buoy and wave-gliders, which all form a special observation array around the MIRAI.

Yesterday, I wrote wave glider can measure ocean surface condition without disturbances around wave glider owing to its slim and thin body. The surface drifter, I introduce today, is much easier to obtain data without such noises than wave glider. This is because simply we use a small (O(10cm)) float equipped with temperature/salinity sensors. Since it drifts, it does not create any disturbances around the instrument. After we deploy it, we recover the next day or so. Indeed, we deployed its first trial yesterday, and could recover it today.

Having said that, it is not an easy task than you expect. You may recall that currently we are conducting on-station observation. Namely, while we need to keep the position, we also have to recover the drifter, which moves several 10 km away. Thus, we need to arrange observation as well as personnel schedule.

In addition, although GNSS-receiver is equipped on the float, it is very tough to find such 10-cm diameter ball in the ocean using only GNSS information. Of course, we need to avoid hitting it by the ship. Thus, after we reach the expected area, while we look for the drifter using telescope and binoculars, we also use a small boat. As usual, ship crew can find it earlier than researchers. As shown in photo-2, finally we caught it by hand from the small boat.

I have to talk about science derived from this trial. As noted, this drifter can measure temperature and salinity in a couple of centimeters of the ocean surface, which is greatly influenced by atmospheric condition, and vice versa. Through this knowledge, we’d like to know a life cycle of cloud and associated large-scale features.

Today we recovered the drifter under the heavy clouds (but no rain). According to the satellite cloud images, it was part of cloud cluster of O(1,000 km). In addition, weather forecast says low pressure area was formed around here and then it is expected to move northward. Thus, while I will watch its first data obtained by the drifter, I may also be aware of cloud ensemble movement to see any relation to weather condition over Japan…

The drifter we use is called Surpact, which was developed by our French collaborators of LOCEAN. This observation is conducted under the framework of French-Japan Science and Technology Cooperation.  Its details will be noted in the Cruise report. 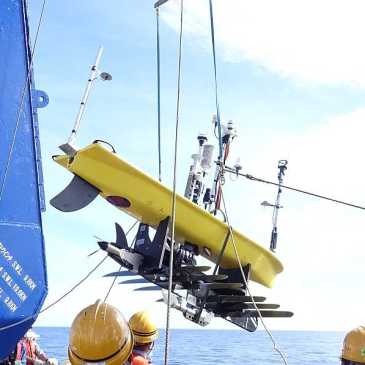 During on-station period, we are deploying various observation systems around the Mirai. Yesterday, I introduced TRITON buoy, today I’d like to mention about wave-glider, autonomous surface vehicle.

A wave glider consists of float (yellow part in the photo-1) and glider (identified with many fins in the same photo). This photo does not show its exact configuration during its operation, because both are connected by 8-m long umbilical cable. As you can easily guess from its name, this ASV obtains propulsion power from waves. When the float moves up and down due to waves, its motion changes glider’s fin, so that it accelerates forward motion. The operator on land can control its direction via satellite. Various atmospheric and oceanic instruments are equipped, and solar energy is used for their operation. Namely, it is a nature-friendly new generation observation tool.

Photo-2 was taken when we launched. Owing to its slim configuration, it can measure ocean surface condition without significant turbulence around the vehicle.

This time in addition to standard surface meteorological sensors we have equipped GNSS-receiver, which can measure precipitable water vapor. Since water vapor plays an essential role in regulating convective activity and cloud development, this ASV equipped with various instruments can be used to monitor cloud formation from the viewpoint of air-sea interaction.

During this on-station period, we are deploying three wave gliders, which occupy west, north, and east 50 km away from the Mirai. As you may recall, we’ve already deployed one TRITON buoy at south of 50 km away from the Mirai. Namely, this time our observational configuration consists of six platforms within 50 km radius (five are fixed locations, and one is drifting, which will be mentioned later). This is irregular comparing to previous field campaigns, where we usually form an observation network over 100 km in space. I know, we should keep away from 3Cs on land to avoid any possible risk of COVID-19. However, we are challenging to conduct dense observation here. I believe this configuration will bring a new insight.

Note that after our one-month intensive observation here, we will recover all wave gliders as well as TRITON buoy. I do hope they work well and we can recover them. So do you.

One-third of the the R/V Mirai MR20-E01 cruise period has already passed. Today I would like to write about a TRITON bouy which we deployed almost a week ago.

This time we focus on air-sea interaction on the order of 100 km in space to study a relationship between cumulus convective development and ocean surface condition such as sea surface temperatures. For this purpose, while the Mirai keeps her position around 12N, 135E, we are also deploying several observation platforms and instruments around the Mirai. They include TRITON buoy, three wave-gliders (autonomous surface vehicle), and ocean surface drifters. TRITON buoy is originally developed to contribute to the global tropical moored buoy array, known as TAO/TRITON and RAMA array. This time, we use it (strictly speaking, we use its mini-version called m-TRITON) for the one-month measurement.

You can see the top of TRITON buoy or float in the first photo, that was taken when we deployed. Various surface meteorological sensors are mounted on this float to measure heat flux and momentum transfer through the ocean surface. This float is connected with long ropes, where many instruments which measure oceanic temperature, salinity, and depth are equipped from the surface to 500 m depth. This time, we have attached many instruments (5 m interval from the surface to 70 m depth), which is much denser than that by standard TRITON configuration. This TRITION buoy is anchored at the 5000 m depth.

You can see (I know it is difficult to see due to small size) those float, ropes, instruments, and anchor in the second photo, which was taken just prior to the start of deployment.

As you can see in this photo, many people are engaged in deploying of the TRITON buoy. It usually takes more than a half day for the deployment operation. I believe we can surely obtain high-quality data with this TRITON buoy. We are proud of our over 20-year experience of mooring observations done by skillful marine technicians as well as ship crew. Although at first I thought it was tough to keep good condition to measure atmospheric and oceanic condition for one month, now I realize that it must be easy for him (or her?), because it is originally designed to measure over one year against rough sea condition.

I am excited to see what data he will collect during the coming one month. 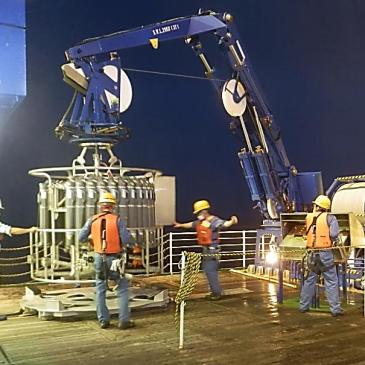 The R/V Mirai is now on station at north of the Palau Islands in the tropical western Pacific. In addition to continuous atmospheric and oceanic measurements such as surface meteorology, weather radars, ADCP, and so on, that those have been carried out since the beginning of the cruise, we’ve started to launch radiosonde and cast CTD every three hours.

Scientists, technical staff, and crew members on board are making a concerted effort for smooth operation. This photo shows CTD observation conducted at night. It started raining in the middle of the operation. I cannot help appreciating the observation data even more after watching closely people working so hard to obtain them!

by SS (edited at J-Office for English ver.)

While radiosonde observation onboard the Mirai has been started since August 5, enhanced radiosonde soundings (from 12-hourly to 6-hourly) at Palau and Yap have also been started since August 6. In addition, it is expected to have another enhancement at PAGASA Legaspi site, Philippines soon.
Thank you, Palau Weather Service, Yap Weather Service, US/NOAA, and PAGASA for your great help and contributions!
According to the ECMWF report of geographical coverage of observations used for their data assimilation system, those enhanced sounding data have been successfully used by them! We can confirm three red dots in the tropical western Pacific, which were not appeared on the chart as of August 4.

Acknowledgment. Those figures are taken from ECMWF website at https://www.ecmwf.int/en/forecasts/charts/monitoring/dcover

At last, we will start intensive radiosonde observation from tomorrow. Radiosonde can measure vertical profiles of temperature, humidity and winds from ocean surface to 20 km height or more. While a semi-auto launcher system is equipped in the sea container onboard the Mirai, we sometimes launch the balloon manually when we cannot operate the ship accordingly due to conflict with other operation or bad weather condition. Thus, today we had a drill to learn how to launch radiosonde manually.

We noticed atmospheric convections around the Mirai has become active, as if they waited for our observation.

Posted by onboard personnel (edited at J-Office for English ver.)

It has been 5 days since we departed Shimizu port. However, even now I, who have joined the cruise for the first time, am still suffering from sea-sick. I wonder why other guys look like being okay.

Yesterday, we deployed an Argo float, which measures ocean temperature/salinity profiles during ascent/descent repeatedly. Those data are sent to the land office via satellite. I heard each float can measure for a couple of years. I felt somehow sad because it will travel alone. I also recognize that even so, it plays a certain role for climate study, as many scientists all over the world use those data. This is what I thought while I watched ship crew working.

by SS (edited at J-Office for English ver.)

The R/V Mirai has departed Shimizu Port, Shizuoka Prefecture at 09:00 on August 1, 2020 as scheduled.

This cruise is a core component of YMC-BSM 2020 field campaign.